Interesting to note something of a history of struggle to pay for building works on site. " Fr. Crook came from the old St. Augustine's in Granby Row, and began the building of St. Wilfrid's Church in 1841. It was opened on August 28, 1842. After two years he found the burden of debt was too great, and was appointed to a parish in Liverpool."

The Hulme area of Manchester, UK, is arguably as famous as its neighbouring district of Moss Side, having been built, and rebuilt, three times in little more than 150 years. Much has been written about the area. We are concerning ourselves in this section with matters related to our company or projects. Hopefully this section will grow as time goes on. After five years of inner city regeneration, the Hulme City Challenge, funded by over 200 million pounds of private and public money, culminated on May 10th, 1997 with the opening of the Hulme Arch, a futuristic new bridge spanning Princess Road. The bridge restores the road link between All Saints and Stretford, which was severed a generation ago. Speaking to crowds, local TV broadcaster and music entrepreneur Anthony H Wilson praised what had been achieved, including 500 jobs either maintained or created and the construction of high quality new housing. Wilson's famous Factory Club (forerunner to Factory Records) was originally held in the PSV Club on Royce Road in Hulme in the late 1970s. 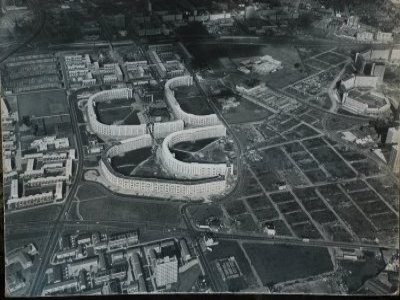 This arial photograph shows that particular incarnation of Hulme in around 1970, when the notorious 'crescent' blocks were just being completed. It was these properties, and much of the subseqent low-rise developments, which were cleared in the 1990s during the City Challenge programme. St Wilfrid's can be seen on the far left of the photograph.

Also present on 10th May 1997 were Alex Ferguson, manager of Manchester United football club, and Derek Shaw, then Lord Mayor of Manchester . At the end of the bridge opening ceremony they were driven across the Hulme Arch in a vintage Rolls Royce Silver Ghost, to commemorate the fact that the first Rolls Royce workshop was established in the area.

A plaque commemorates this fact in the award winning Hulme Park.

Developed from an idea formulated in 2000 by the Ahmed Iqbal Ullah Race Relations Archive with Dominique Tessier, Maria Noble of Manchester Education, and BAA. The trail is intended to be simply a journey of remembrance.